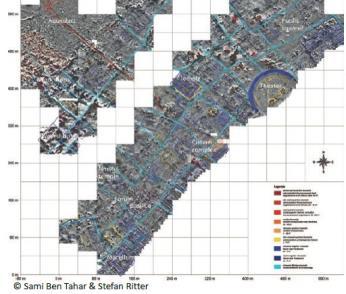 Second appointment of the lecture series “North African urbanitas revisited: new methods and innovative theoretical approaches (3rd c. BC – 9th c. AD.)” in collaboration with the RomanIslam Center for Advanced Studies at the University of Hamburg.

The Tunisian-German archaeological research carried out in Meninx from 2015 to 2018 has considerably enriched our knowledge of the urban planning of this city from its Punic origins in the 4th century BC until its abandonment towards the end of the 7th century AD. In addition to the terrestrial investigations which unfolded a particularly rich city endowed with sumptuous public monuments, very open to the Mediterranean, underwater prospections allowed to locate the port: it consists of a jetty with platform located some 80 m off the current shoreline. In order to carry out this research, the team used an interdisciplinary approach which proved to be particularly fruitful. Thanks to modern scientific investigation methods, such as geophysical prospection, archaeobiological analysis and archaeometric research, our understanding of the ancient urbanism of Meninx has considerably improved.